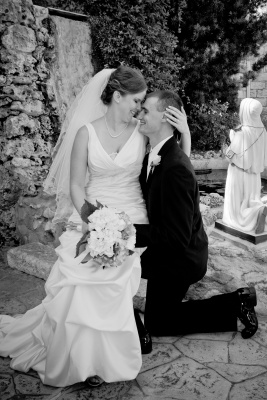 Kathleen and Dwayne were married at the St. Peter and Paul Catholic Church followed by a reception at the Comal County Fairgrounds in New Braunfels, Texas on August 20, 2011. The wedding was very traditional catholic wedding that was very special for Kathleen and Dwayne. The church courtyard is where Dwayne popped the question and one of the deacons that married them has know Kathleen for her whole life.

After the ceremony everyone headed to the Fairgrounds to eat and celebrate. The brides bother in law’s company catered the reception and the food was spectacular! There was brisket and chicken, potato salad, cucumber salad, green beans and rolls. They also had an amazing 7 cakes,  the main bride and groom cake then they they had extra made up to accommodate all the guests. Some had filling some did not. The grooms German chocolate cake was really tasty and was decorated with a fire truck. The bride took some of her bridal portraits on the truck and added those to the table as well.

After everyone had eaten the toast started and there were many friends that wanted to toast the bride and groom but Kathleen’s sister was the best. She said her sister deserved a big toast and brought out a huge wine glass to cheer with!

The family and friends danced into the night and took a ton of photos! At the end the bride and groom left to a shower of birdseed and neon glow sticks stuck to the back of their car.

For more images from this and other weddings visit www.facebook.com/straughanphoto